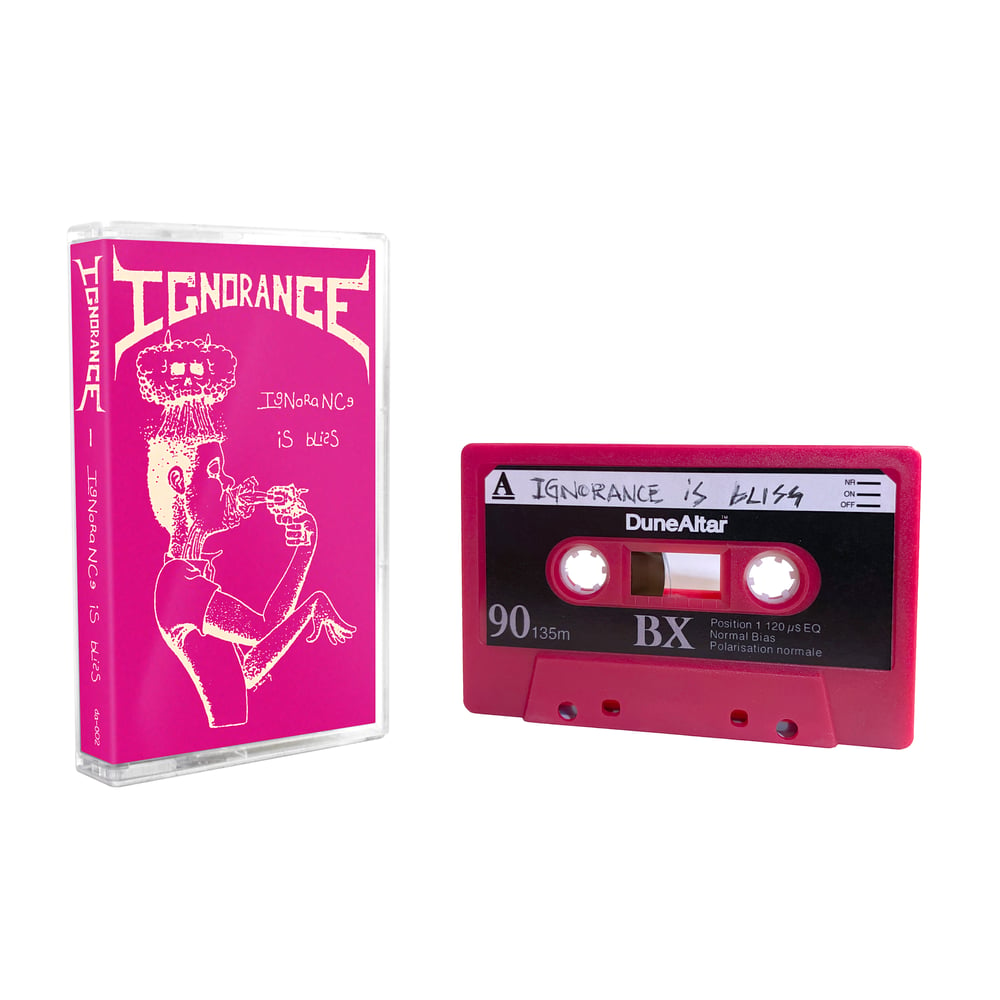 IGNORANCE IS BLISS  ᴄᴀꜱꜱᴇᴛᴛᴇ ᴇᴘ
a1.  Bloodshed
a2.  False Warning
a3.  Animated Corpse
b1.  Up Against the Wall
b2.  Mr. Clean Is a Skinhead

IGNORANCE was a crossover thrash band from Apex, North Carolina in the early 90s. They were five fresh young minds, eager to make music.  Being kids of the eighties, the band grew up around nuclear protests, having lived 10 miles from a nuclear facility.  This early political awareness caused the band to fall right in line with the politically charged music of the hardcore and thrash scenes at the time.  Forming in 1990, the band honed their skills, playing shows at parties, local clubs and clubs in neighboring towns for four years, before imploding in 1994.

In ’90, the band had an opportunity to record a demo, having acquired permission from a friendly youth minister at the local Baptist church to use their facilities and recording equipment.  On the church property, there was a one-room farmhouse that had been converted into a rec room for the youth ministries.  There among the tables and spare furniture (which they used to barricade the amps), this unholy demo was recorded live using the church’s 12-channel Mackie, 7 mics and a tape deck with a quarter inch input.  Of course, due to the grim nature of the music and the fact that some of the songs contained cursing, the youth minister was fired!

The songs on IGNORANCE IS BLISS, their 1991 release, range in subject from mans inequity to the political media to post-apocalyptic landscapes to life lessons to, of course, light-hearted fun.  DUNE ALTAR is proud to reissue this little known gem in a limited, hand-numbered cassette, remastered by Pete Lyman (Ancestors, Red Fang, Rival Sons).

All orders ship out once-a-week.  Your patience is appreciated.  If you have any issues regarding your order, please feel free to contact us via email at dunealtar@gmail.com.

IF YOU'RE ORDERING FROM OUTSIDE THE UNITED STATES AND YOUR SHIPPING COSTS GET OUT OF CONTROL, PLEASE EMAIL BEFORE ORDERING